Good afternoon everyone! I thought today was a good day to start the October 2021 chatter thread. Just in case anyone wanted to see what other patterns or projects someone is planning to start in October.

I think this would be adorable for those with young ones. The felt should stick nicely to the pumpkin.

These are my two favorite pumpkin patterns. I’ve made at least 6 of the Pumpkinhead Slouchy hats and I will probably make more this year. And I’ve made about a dozen of these adorable cabled pumpkins and scaled the pattern up and down to make sizes from a little one about 4" around to a big one that was about 30" around. There is a crochet version on the site too, but I have yet to try it as I haven’t learned how to crochet yet.

I don’t like to think it’s almost October. Winter will be here all too soon.

I have started knitting my daughter’s thrummed mittens. I’m making a pair for her and my grandson for Christmas presents. I also ordered my grandson’s Lego Advent calendar. If anyone has grandkids who love legos, my grandson was crazy about the Lego Advent calendar I got him last year. He just loved opening the little doors and getting a little kit to assemble something. This year my daughter chose the Star Wars calendar.

I’m pretty sure I got those for my kids when they were younger and they adored them. Much better than giving them more candy than they were already getting at Christmas time!

I just happened to see them on the Costco website last year. I didn’t know they existed. I discovered them at just the right time since my grandson is five now and is really getting into Legos.

I’m trying to remember how old my boys were when I got them the Advent calendars. I think they were about 6 and 8, so it would have been somewhere around 2007 or so. My boys were very into Legos (my 24-year-old still is!) and anything Star Wars, so the Star Wars Lego Advent calendar went down VERY well. I’m glad you found them for your grandson, they’re really fun.

My daughter loves Legos so I think she gets just as excited about the daily surprise as my grandson.

Are you Costco members? I got the Star Wars one from Costco.com. They might have them in the stores too.

Yeah, I told him that’s where you got yours and he’s going to check tomorrow after work.

I love that pumpkin pattern but I have one I bought years ago from a YouTuber called Nordic Stitches that is my absolute favorite. But she has left social media so I don’t know if there’s any way to get the pattern except R now.

My oldest grandson gets one every year from his Aunt.

Thank you for posting these patterns. They are adorable.
I just downloaded the pumpkin patterns from her site. JulieMeasures.com

Oh I have a grandson who would love that!

Not an actual pumpkin but I’m thinking of making this if I can find the right yarn.
http://marianneheikkila.com/knit_and…pice-pullover/

Will you do it pumpkin color?

I hope you find the right yarn because I can’t wait to see this.

Thinking about making “Spooky Pumpkin Mitts”. Free pattern on R (could not find it elsewhere), but can be downloaded without having an account. 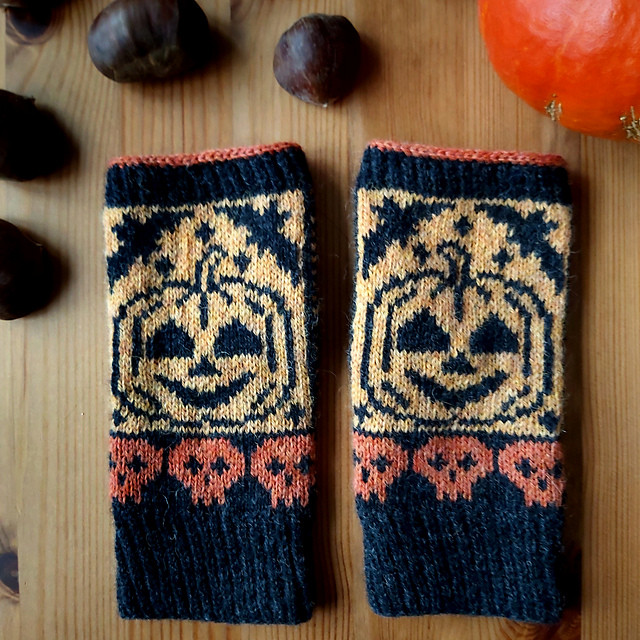