Good morning and happy August! We are getting some much needed rain today. It is very gray and dreary but sooooo needed. Our farmers have been suffering this year, and my community is 90% agriculture. Rain dances everywhere!!!

Work wise I am starting budget season… later this year than normal. The State revenues have been acting wonky so I haven’t done a thing. Oh well. We have until November, I just like to get it done early.

Craft wise I have a bunch of 3d masks cut out. I’m trying to decide how to further cut them to make them into an awesome quilt.

The mental wheels are spinning. I’m also hoping to bring 4 quilt tops for quilts for kids to the long armer.

And - it is back to school time! My older son is going back to the academy in 12 days as a senior he reminds me. And a few short days later my younger son is a Junior in high school. I think Friday both boys will be taking their written driving test so they can start driver’s ed. EEEKKK! Might as well get it done all at once, I suppose.

Hope this finds you well!

One question… and I’m serious… how did it get to be AUGUST already???

I agree…the year has seemed to fly by.
@Pegg Thomas I thought about you today. I am listening to a free summit online geared toward writers. Lots of encouragement, a few laughs and some helpful hints about editors, publishing and such. Let me know if you are interested in the summit…I will send a link.

I just finished up using my supply of Noro Shiraito yarn. I enjoyed it and love the end product.

I felt silly having such conflicting feelings. Not as silly as I felt in a big box store today!! I thought I was having auditory hallucinations, and there was no one around to ask if they heard it too. So, followed the sound until I was standing right in front of an animated, musical Christmas tree. Playing all the Christmas favorites. On the 1st of August.

I agree! When I saw the August board opened, my first thought was literally “Oh, Char is getting a jump on things.” Then realized that it is now August… What happened to this year???

Agree, I don’t enjoy Christmas dec before Thanksgiving. If it’s spread out too long, it isn’t special or meaningful.

I did some homework this weekend learning German Short Rows. This is my first attempt. I just love the Patons Kroy for boy socks!
I decided to give GSRs a shot on my patriotic socks in progress, so I’ll see how I do. I added 4 additional rows at the beginning to make it slightly bigger following Rox Knits directions. 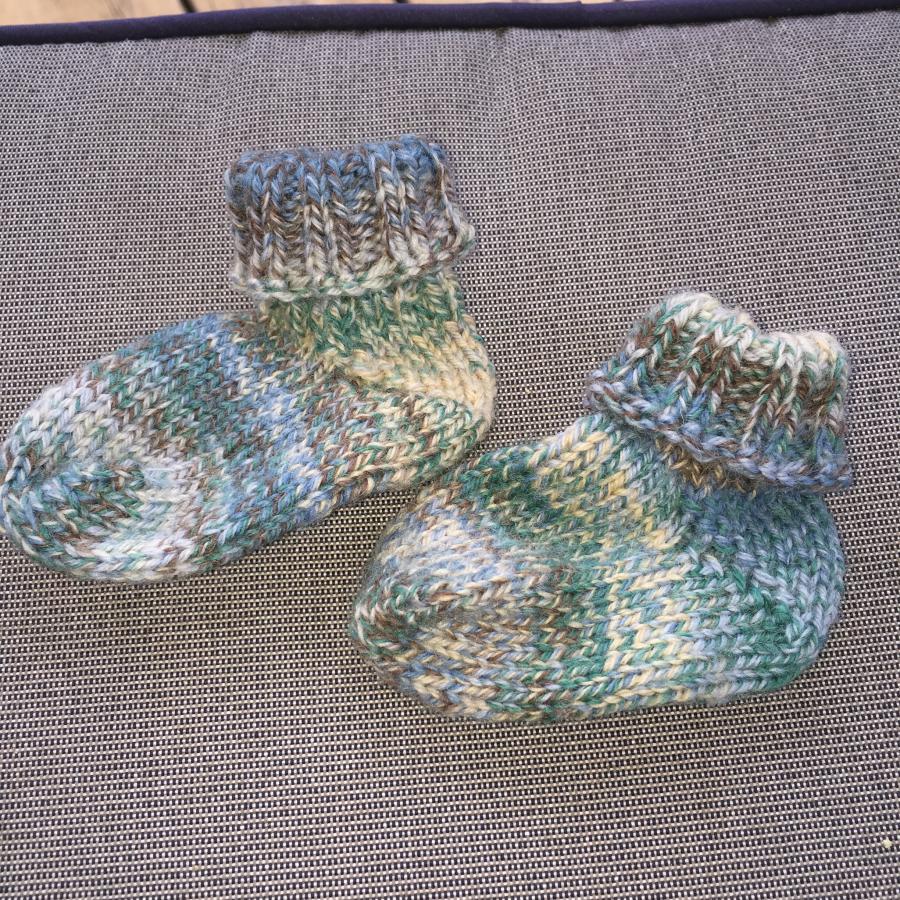 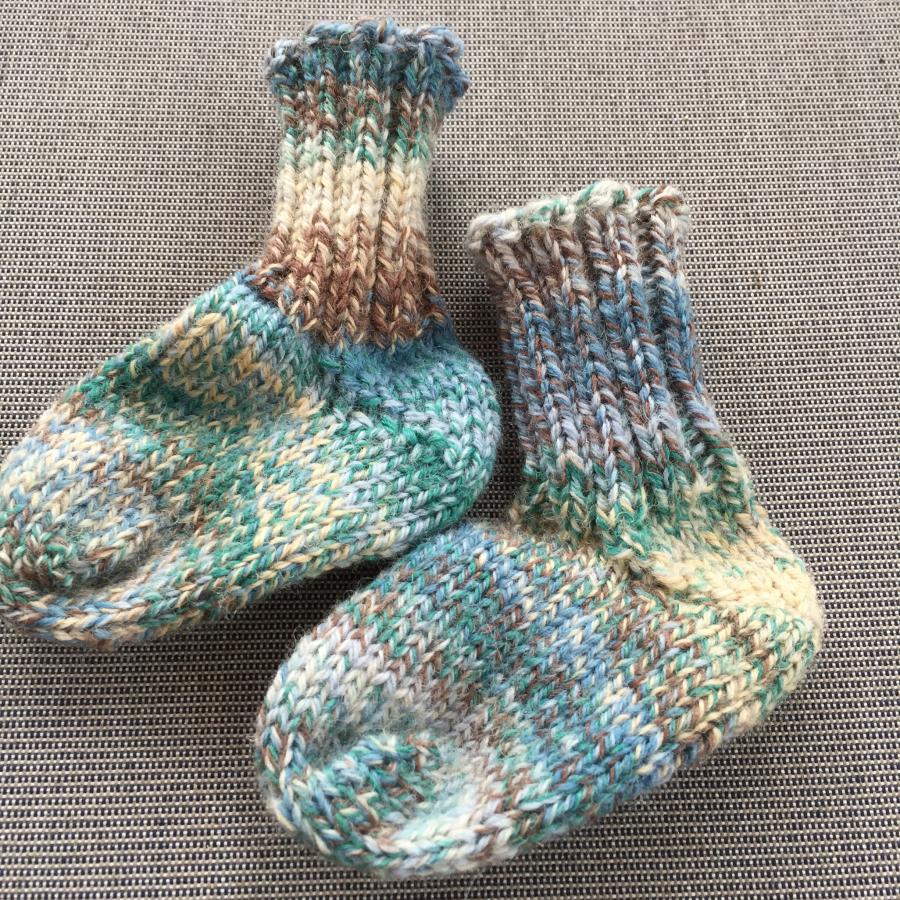 I would love it if we still had the traditional Advent and Christmas seasons. I’m a Catholic, and the tradition way back was that the Advent season was a bit of a penitential season, as we are anticipating the arrival of Christ, in our lives, at our death and in the second coming - like “O Come, O Come, Emmanuel”. Then the Christmas season starts at Christmas! Depending how you count it, it goes on for weeks. However, just as the Church gets going, all of the Christmas music, etc., stops.

I enjoy all the music and decorations (starting Thanksgiving weekend), but I don’t like how it just (in the culture) ends on Boxing Day. Keep the Christmas party going!!

@MBearMakes I was raised catholic and we always did advent as the four weeks before Christmas, and it lasted for 12 days after…. Odd how that is different.

I too am Catholic, and we don’t start Christmas until Midnight Mass on the 24/25. Christmas goes until the Baptism of the Lord in January. My Dad was born on Jan 6 ( traditional Epiphany) and where he was born (Hungary) the 25 of Dec was a very Holy Day and presents were not exchanged until Little Christmas ( Jan 6). As a child we put our tree up on my brother’s birthday (Dec 22 and took it down Jan 6). We still have a real tree so we put it up sometime around the 15th and leave it up until at least the 6th.

@MBearMakes I do remember Advent as a penitential season, and even now that aspect is brought out in our homilies during Advent.

Oh it drives me crazy when they put Christmas things out before Halloween even is out of the way! Other than listening to some of my favorite Christmas music, even though I’m not and never have been Catholic, I started about twenty years ago keeping our Christmas pretty much as @MBearMakes describes for a number of reasons. It’s a lot more of a sure bet to get a truck driver home for a holiday in January, I really really am not comfortable with how materialistic the modern “Christmas” has become and this way I get to take advantage of after holiday sales instead of fighting crowds pre- holiday. And I also have an easier time getting all the kids and grands together if I choose to. No juggling their in-laws/other grandparents schedules.

I just finished up the 2nd heel of my patriotic socks yesterday, I only dropped a few stitches and couldn’t figure out how to pick them up, but overall it was ok. They fit really well and are comfortable.
[IMG2=JSON]{“data-align”:“none”,“data-size”:“full”,“src”:“http://fiberkind.com/image/gif;base64,R0lGODlhAQABAPABAP///wAAACH5BAEKAAAALAAAAAABAAEAAAICRAEAOw==”}[/IMG2]​ 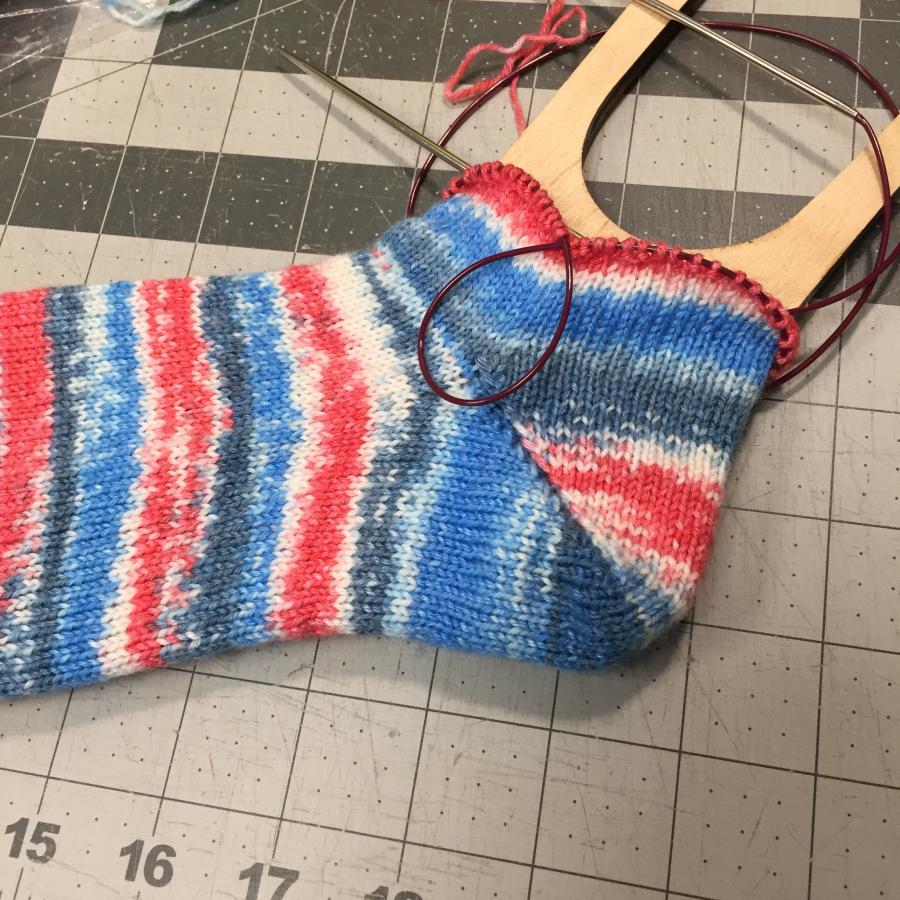 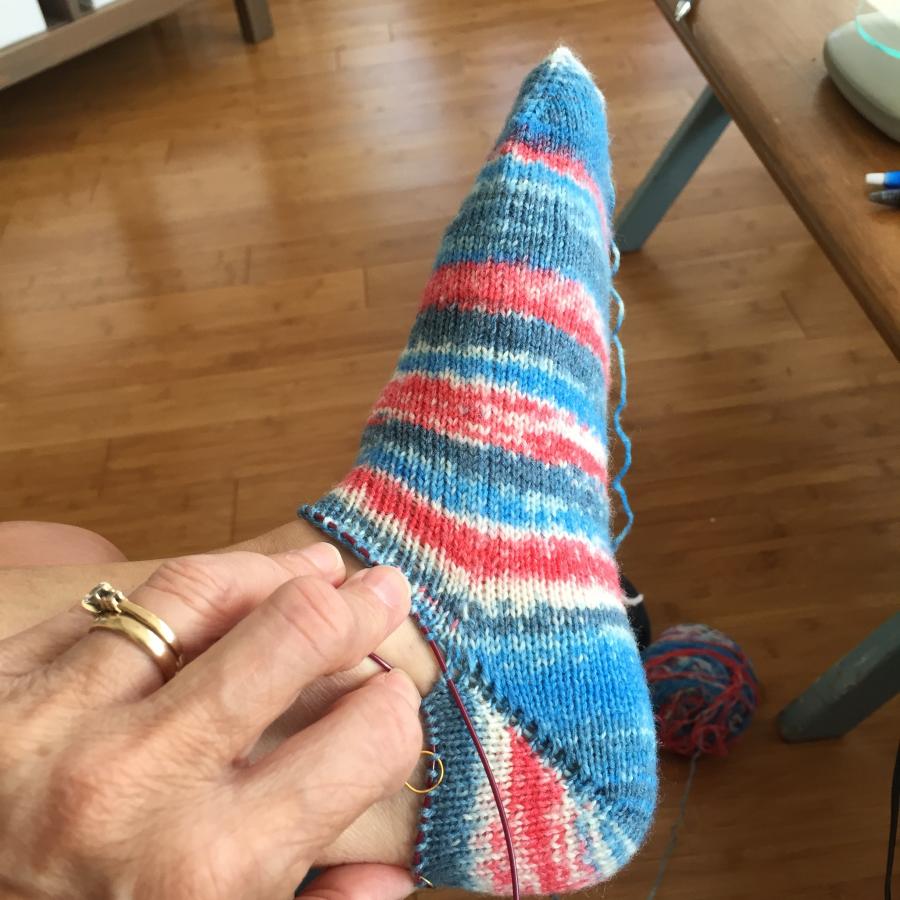 Although I love the Christmas season. I say season because we have always milked it out to include most, if not all, of December. We love the decorations and lights. Apparently, we think the neighbors also will enjoy our lights from December 01 to about Jan 05…Lol.

I understand the different religions celebrating for whichever time frames they have. However… from a non-religious point of view. I still think it is way too early. My mom taught me right…there is no way I am going to buy decorations right now. Not with several other things to celebrate between now and December.

This is my Wip for this week. I am listening to a seminar online, taking notes, and working on this. It is a very easy project to do.

I got lost in a rabbit hole online this week. I found a site where she was showing all of her stash of cross stitch kits. Wow…so many pretty ones and the video was going to be over 2 hours long. I watched a bit then decided I had better turn it off cause I was going to want to purchase some of those kits.

Has anyone seen a video of someone talking about their yarn stash, or fabric stash. That would be fun to see and hear. 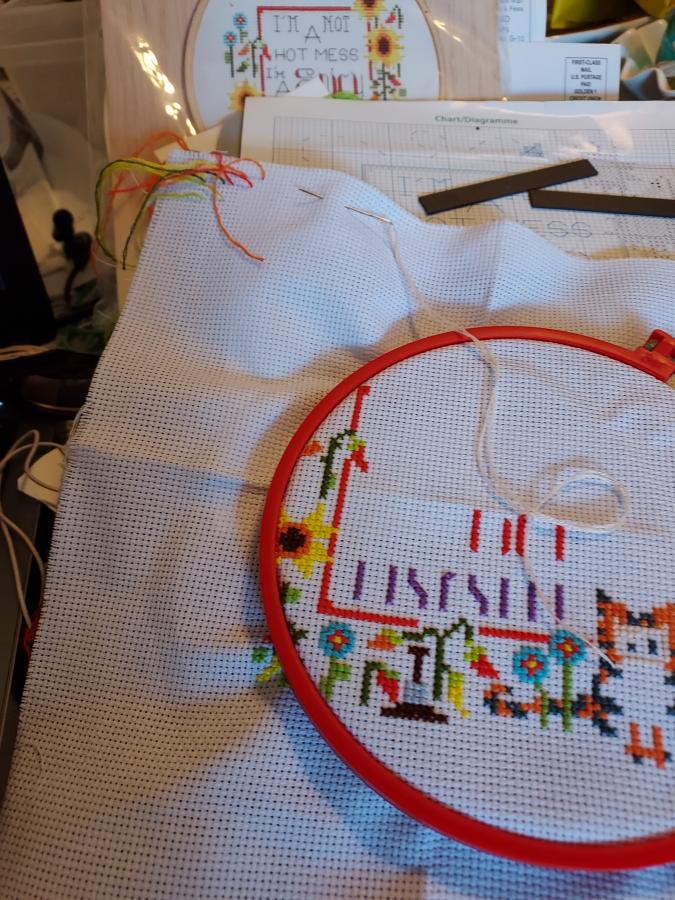 I’ve made a fair few socks now and have the idea down well enough that I’ve even done a few basic designs of my own. I’ve been working on baby socks and hats for a MAL challenge over on Instagram and really want to make this design I have in my head. The problem is, the only way to do it is if I make the socks toe-up and I’ve only ever done top-down. I’m doing a test of a plain vanilla baby sock with the same numbers I will need for the gauge of the other one I’m planning, just so I can get the concept down. I have gotten past the gusset and heel turn, but the problem is I have this big hole on one side of the top of the heel. I am using the Fleegle heel design and have checked and double-checked the instructions and I have done everything right. It’s really frustrating because it even states that it is a “no hole heel”! Does anyone have any suggestions on what I may be missing or doing wrong? The first pic is the side with the hole and the second is the other side which doesn’t have any holes. 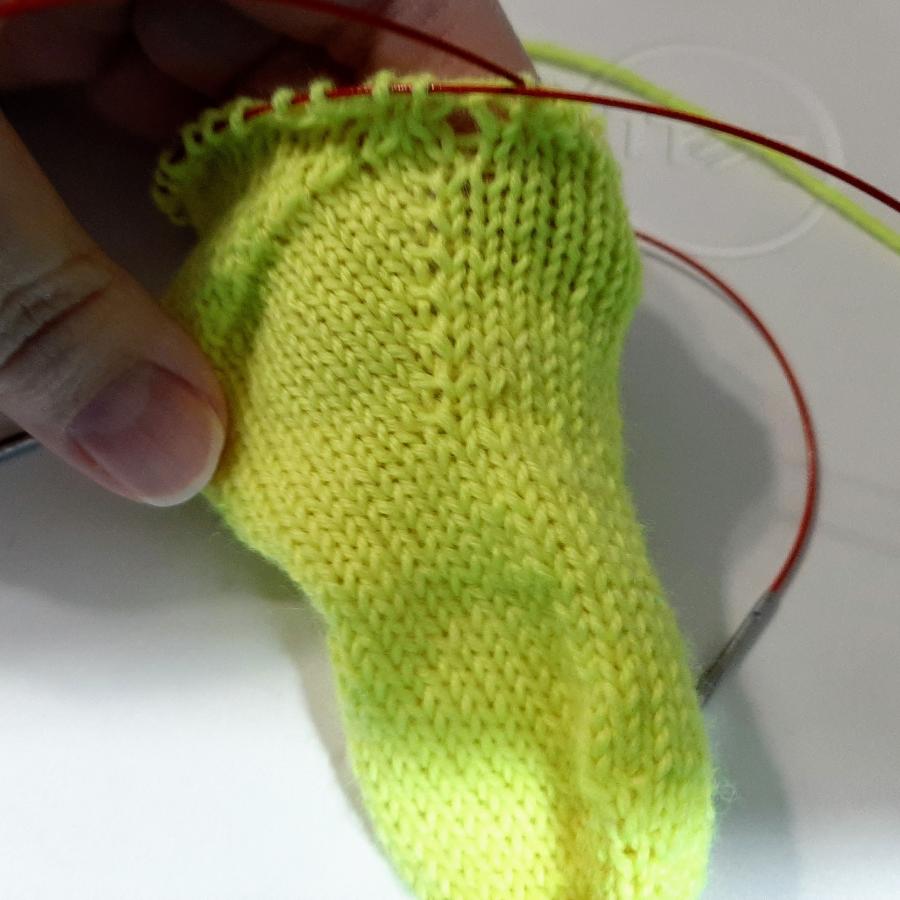 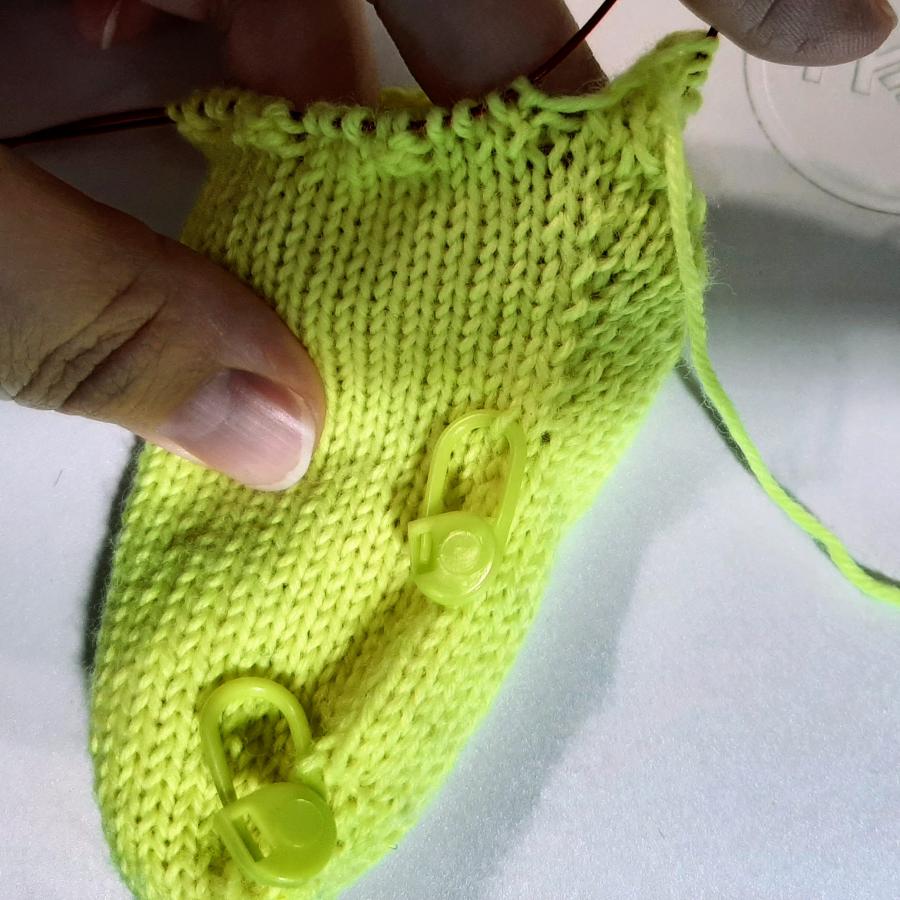 My latest quilt. I’ll look at it for a while and decide if I need a different layout.

I have enough blocks for two quilts. 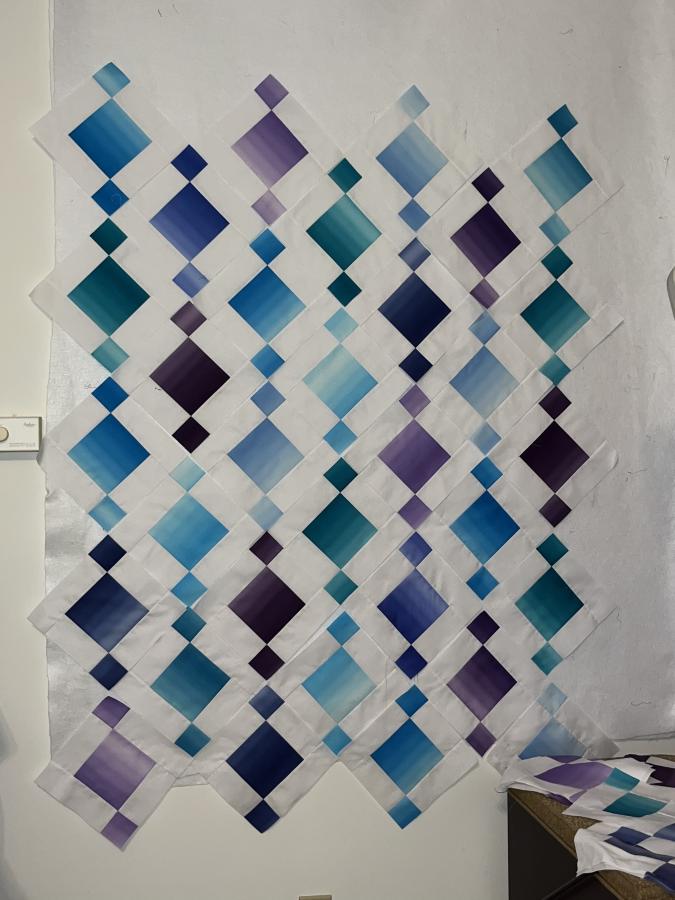 I think your project looks like it will be cute! You know, I feel like I have seen that, but now I am trying to remember. If I think of it, I will post it on here.