Something Old...Something New and a bit of Blue

I am going to attempt to turn Great Grandma’s crochet into a somewhat handkerchief size item to give as a Bridal gift to my new daughter in law.
My plan is to make sure it is as square as possible then add a border of some kind. A simple border. Then put in a bit of blue.

Does anyone have suggestions as to which border? Any helpful advice before I start? 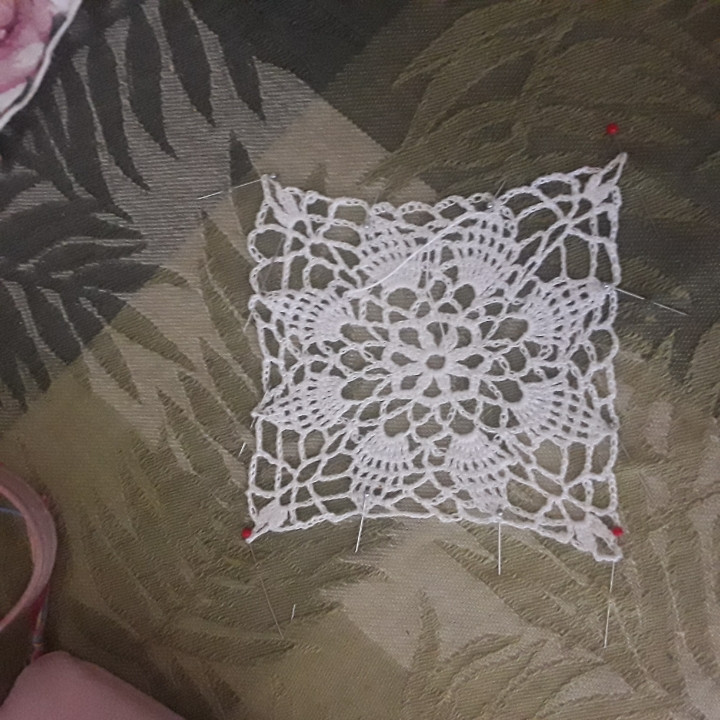 What is the approximate size now? If you only need to add a little bit to make it the right size, one idea would be to crochet a round or two in blue and then do a border in white. If there was a slight shade variation between the whites the blue would separate them. and so minimize the difference.

The square is only about 4 inches. I don’t know if it is a good idea to try to make it the size of a store bought hanky. I think those about a foot across. However their edgings looks to be about an inch or so. If I do that then the whole thing will end up being 6 inches across. Which I would be okay with because this is more of a sentimental item and don’t think it will be used to dry eyes and such. I have a lot of Grandma’s old thread. Not enough in blue to do a couple of rounds. I think I have enough blue to crochet a small bow. Do you think I could add new thread to the old? If I can…then I will run out and purchase some blue. I do have one big box craft store that is open in a controlled way right now.

I did find some White that I think was hers.
I could also see if I have some of the Brides favorite color. Which…depending on who you ask is either pink or burgundy.

Thank you Sommerfugl for your suggestion of separating the whites.
Pinesprairie I like that your border is simple enough I can finish this in a week. And the idea for putting a colored ribbon thru the edging is very tempting. Especially if I should not add new thread to the old.

This feels a lot like the time I was with my parents when they were trying to figure out what kind of frame they wanted around an original piece of art work. I think choosing the oil painting was easier for them than choosing the frame. That artist was so talented and incredibly kind and patient. She made quite an impression on me when I was a young teen.

I think Sommerfugl is right, if you do add new thread to the old you can be certain it will be a different color. If you have enough of her old thread, you could alternate in some fashion to make the difference in color appear intentional. For example, just the corners or something depending on what you already have.

Thank you for your advice. Thought I would post what I ended up doing with this project. (I have also posted over in the group Crochet is my yoga.)
I began by crocheting a simple two rows of that blue thread you see in the picture. I let it sit for days on the table trying to get used to it. Several people said it was nice that way. However, every time I came in the room I saw the blue before I saw grandma’s beautiful work. Actually I had to force myself to not stare at the vibrant blue and to see her work.

With a very gentle nudge from @TexasPurl I was determined to finish this yesterday. So I ripped out the blue and used the same blue thread to make a long thread braid. I wove the braid in and out around the square. Then I anchored it with a stitch of the white border I was adding. I wanted to keep it simple. The border is made up only of groups of sc and hdc. I had tested the blue to make sure it was not going to fade. Then I washed, lightly starched, and blocked the handkerchief overnight. I do not remember how old my white thread is. If it isn’t from grandma it was bought at least 5 to 10 years ago.

I am happy with how it turned out. I don’t mind that my stitches are much looser than hers.
We think the pattern looks like strawberries. The only book I have of hers shows a lot of pineapple patterns, but…she made us one that was a beautiful pink and we always called it a strawberry pattern. So we will probably end up referring to this as strawberry as well. I noticed several variations of the pineapple pattern in the book, and mostly they were calling the variations a flower name.

Thanks to everyone who encouraged me to jump in and try, and to complete this.
Stay safe and well. 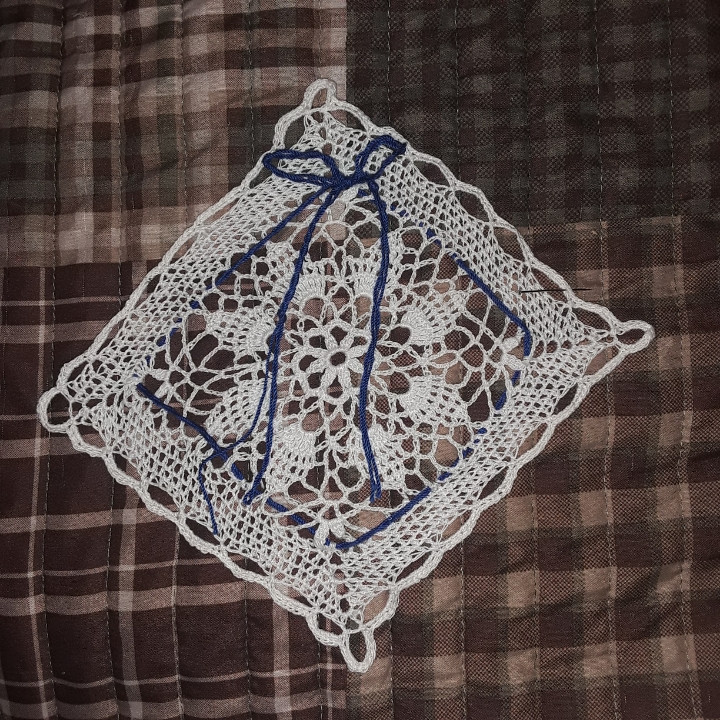 It’s perfect, @hereami! It turned out very nicely and the most important thing is, you’re happy! It never hurts to try and make your vision come to life!

This turned out lovely!
The edging you added and that little bit of blue braid are perfect.

It’s fabulous! I’m glad you stuck with it.