I’m looking at an Ashford and a Kromski 16 inch loom. Any thoughts from anyone who owns one of these?

I am learning on the 24” Ashford, and it is great. :-). My husband says it is well made, and I have had no issues (except for user error lol)

I noticed the new ones now come with the attachment for a double heddle (which is useful as we get more experienced), and the warping holes at the bottom of the loom (need pegs, though).

My very first loom was an Ashford Rigid Heddle loom, 24". I was completely satisfied with it and thought it was well constructed. Fell in love with weaving because of that little loom!

I have a LeClerc Bergere, which works, but probably wouldn’t buy it as a new one for a couple reasons, one being the height of the loom and the other being the design of the heddle block and the cog wheel which tends to vibrate loose from time to time, but I will say I think I would not want anything smaller than 24" unless you have the wherewithal to purchase a wider loom as well as the storage room for multiple looms. Most fabrics lose a bit of width, so anything you make on a 16" loom is going to be less than that, around 10-15% average. But if that’s all you can afford, I’d say go for it and get started weaving! Used looms are often a nice option. Check FB marketplace or Craigslist.

Thanks everyone! This is so new to me, I’m grateful for the input.

I’m thinking of ordering an Ashford 24 inch loom to start with which comes with a 7.5 Dent Heddle. I plan to practice with the worsted cotton kitchen yarn I have and then order 10 Dent and 12.5 Dent Heddles and 8/2 yarn when I can, probably a couple of weeks from now.

This is exactly what I started with (the 7.5), and have been using the thinner 8/4 cotton to warp, and worsted to weft. The warp doesn’t show as much, and I’m ok with that.

The patriotic towels I just finished I used 8/4 doubled for both the warp and weft (actually made direct warping easier) on my 7.5. They aren’t as soft as the I love this cotton, but that’s ok.

I am now warping a full width warp, and I’ll do my towels width wise - More towels on a warp.

Thanks for your input, I’m really excited about this, but in a calm sort of way. I’m sure this may sound strange, but it’s like I’m supposed to be doing this. I love making things to use in my kitchen and and this will take that to a new level.

I have the Kromski 32" rigid heddle loom. I bought it at the Woolery. I was undecided between it and the Ashford. The built in warping board was the deciding factor for me. However, I’m now considering buying a stand alone warping board. I like to do very long warps so do not do the direct warp on this loom. I also have the 15" cricket loom for smaller projects.

Its here! This is a 24 inch Ashford and it was easy to assemble. 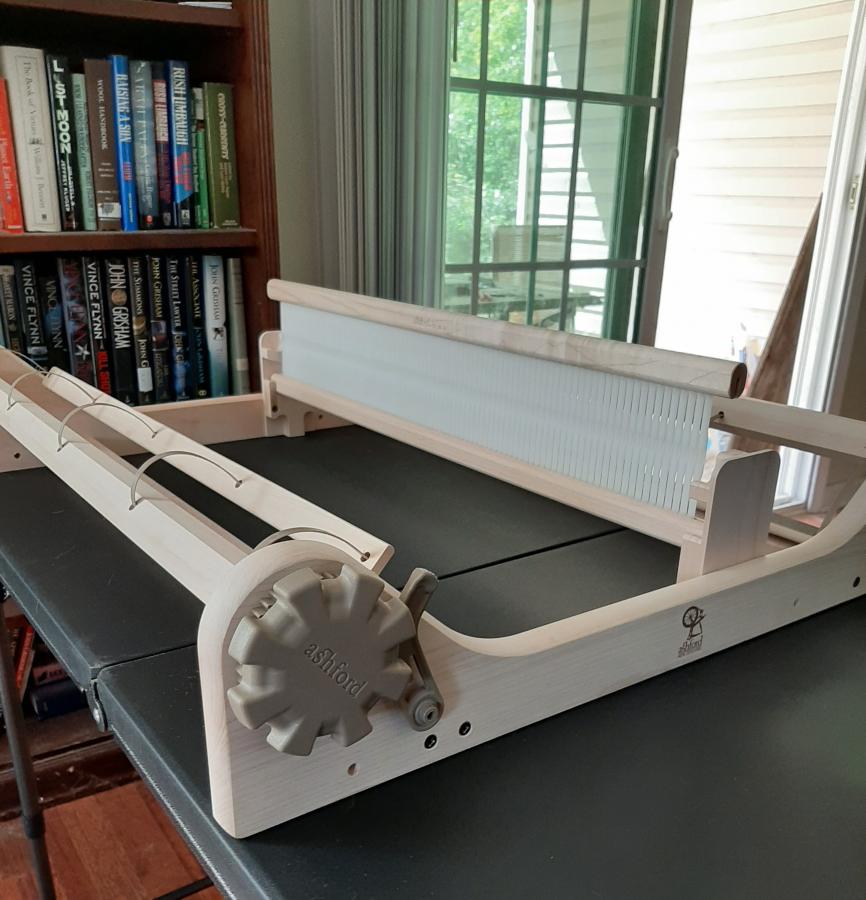 How exciting! I can’t wait to see some finished projects.

Thanks everyone, I’m so excited. This is such fun.

I certainly thought so, their website says to allow 4 - 14 days for delivery and they were awaiting a new shipment from New Zealand. I’m very impressed with the Woolery and will be ordering from them again.

I’m getting serious about buying a rigid heddle loom but The Woolery is out of the 24" Ashford. I was thinking maybe the 32" wouldn’t be too bad but I don’t want to get overwhelmed and end up quitting before I get started. Hopefully, they will get more in soon!

I have the 32" Ashford. It’s just a wider version of the 24" and gives you a lot more flexibility for width of your project. I know people who make baby blankets on their RH. Or you can make something 6 inches wide on it. I think you’ll be fine with either one. But the 32" is pretty big, not quite as portable as the 24". You have plenty of company here with RH weavers. You’ll have a blast!

Yay for another soon to be weaver!

The funny thing is the 32” is only 8” wider - So approx the length of your thumb to the end of your pinky (possibly less?). If space isn’t an issue, I would think you’ll be Ok.

Knitting something narrow like a thin scarf may be awkward on something that big. I think I’d put an extra warp (waste?) at both ends of the heddle when warping for balance but not weave them. Not sure.

Ashford is manufacturing again, so it shouldn’t be too long.

I have a floor loom 35" width and I have no problems weaving any size cloth. You can even do inkle bands on bigger looms. A 32" width would actually give you more options.

Whichever way you go, I hope you get it quickly! Nice to see another new weaver joining!