Question: How to unhook heddle bars from center hook

When rearranging heddles prior to threading I have only seen the briefest mention of unhooking the heddle bars from the center hooks (Janet Dawson) but have seen several videos in which they are clearly unhooked while the weaver threads the loom. I watched Jane Stafford skillfully pop them out, and her loom (Leclerc Fanny CB) is the same as mine but it was like she does it all the time and didn’t indicate the amount of force needed to do this without bending the heddle bars. I found a very expensive replacement spring hook at Camilla Valley Farms in Canada and that Schacht has a less expensive equivalent, which looks like it allows an easier release. Any thoughts about this - I am afraid of bending my heddle bars and up to now have gotten by with careful counting of heddles, no ability to scoot left or right of center for best alignment. My loom has been retrofitted with Texsolv. You can see I had to tie a home made heddle to have enough on shaft 1 on my last project to the right of the hook, which is like a roadblock. So my question is: what is the trick for popping the heddle bar out of the center hook? I have only done `3 projects on this loom and have awkwardly managed without unhooking. 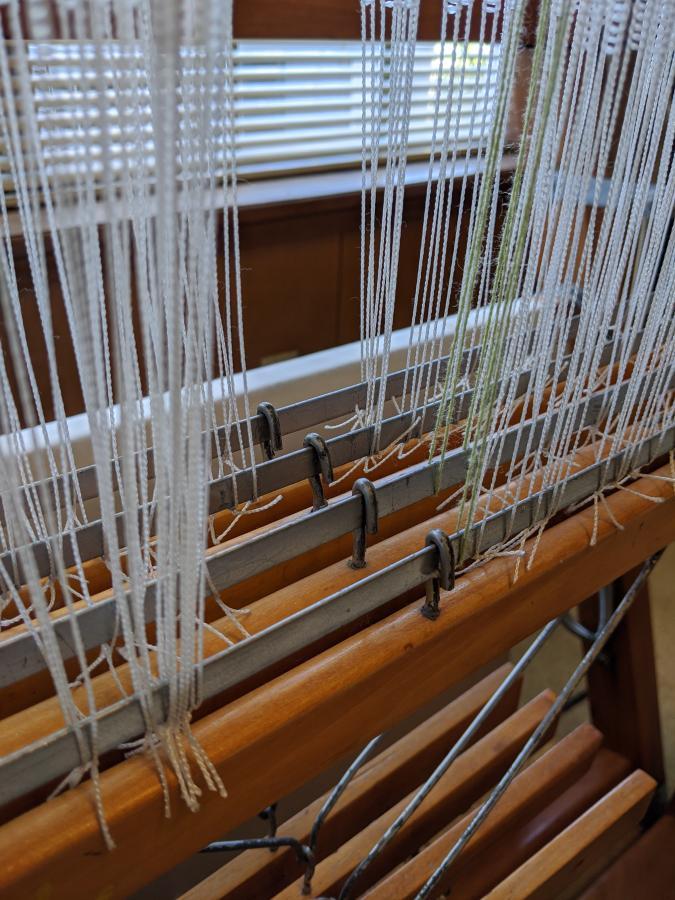 I pop mine off a LOT when I’m moving heddles around. My older homemade floor loom has this type of system although still with metal heddles. I just put my thumbs on each side of the hook and press/pop it down (or up) until it clears the hook then reverse to hook it back up. The first time I did it I was afraid of breaking something but I have done it numerous times since and it hasn’t damaged or “twanged” the metal bars (technical term that

Wow thank you for the shot of courage. You described what I saw Jane Stafford do. I will be trying that tomorrow! It will be awesome to be able to manipulate heddles as needed, especially in the middle. I appreciate the answer!

@Carlota … you’re welcome! I fought with that feature on my loom until I saw Jane Stafford do it in that video. Light bulb!!! And indeed motivating courage…the first time I tried it I started out gingerly but had to keep applying pressure until it slipped down and out of the hook. Huh?! That wasn’t so bad. I moved on to the next one with renewed hope. Now I just grab and go. Saves a lot of time rearranging heddles when you don’t quite get the count right.

Well I tried it and it was fine! So no more worries. it will be of use especially on my loom, which has one of the hooks offset from the other three, which can make it hard to plan for a smooth flow of heddles through the middle of the project. Now I can micro-adjust. Thanks again.

@Carlota … Yay! Funny you should mention that one of the hooks is off-center from the other three. Mine is like that too. I just chalked it up to being a handmade loom and for whatever reason they weren’t able to align that one “correctly”. Maybe it is a brilliant design feature I have yet to discover.