I pulled one out of the dye pot yesterday. This was Knit Picks Felici in Soft Serve (here’s someone else’s FO for a before picture) but I didn’t care for the colors. I tried knitting a baby cardigan with it, but wound up frogging it for various reasons, so it’s been sitting in my stash ever since. Yesterday, since I didn’t have any sock yarn I liked(!) for a sock KAL, I decided it was time to overdye the Felici alongside a previous failed dyeing attempt.

I underestimated how much dye would migrate from the other yarn (deep pink), so this is what happened in a 1% bath of Lanaset Blue 2R, which is normally a bright blue. I can’t complain, it’s a lovely shade!

No pics yet of the other yarn. Much less dye than I wanted actually struck, so I need to give it another round of heat. 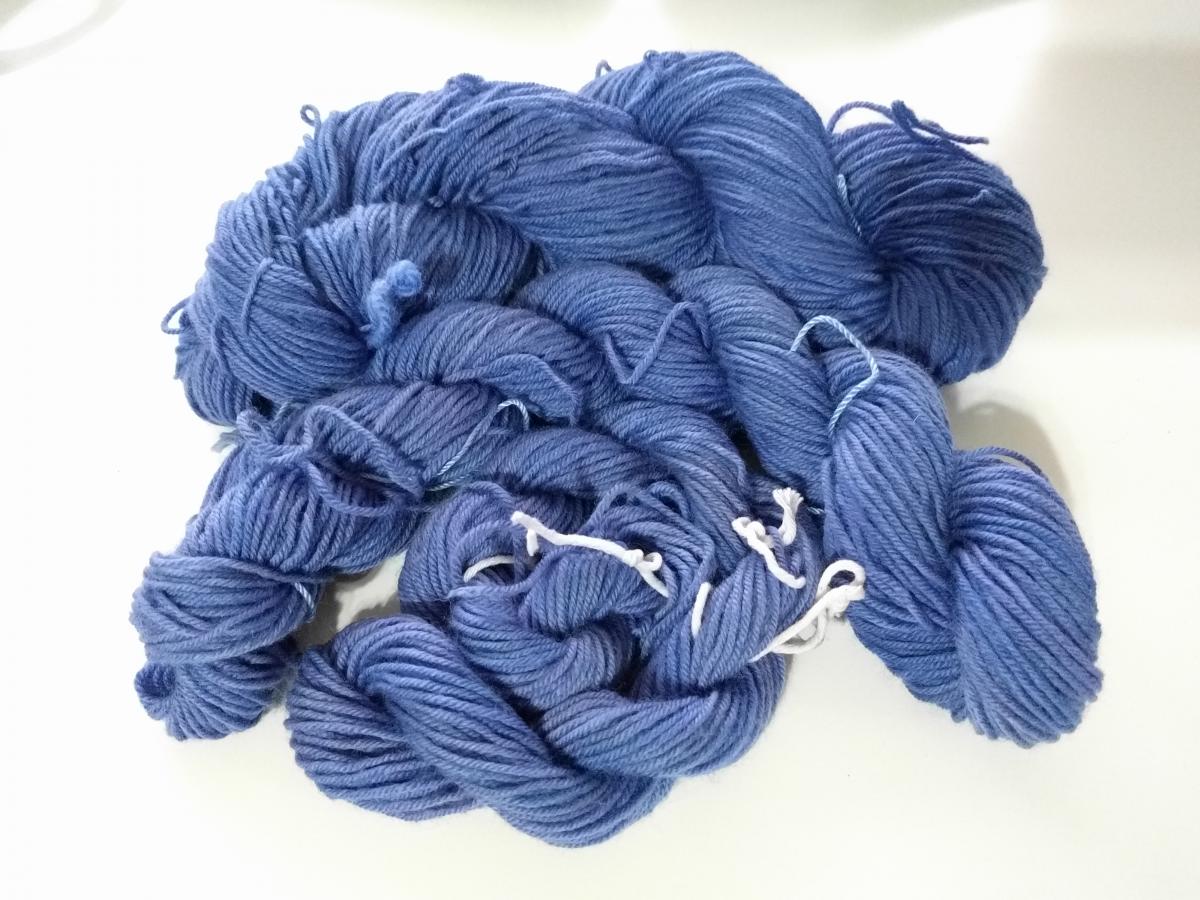 Here’s the other yarn after two rounds of heating. I put in dark pink, and I get… cornflower blue?

I kind of know what happened – when I brought the dyebath up to temp (twice), the old Jacquard dye detached. I knew this would happen to an extent, but I didn’t expect it to be so complete or that the Lanaset would take over so thoroughly. I can’t complain, because I like the shade! 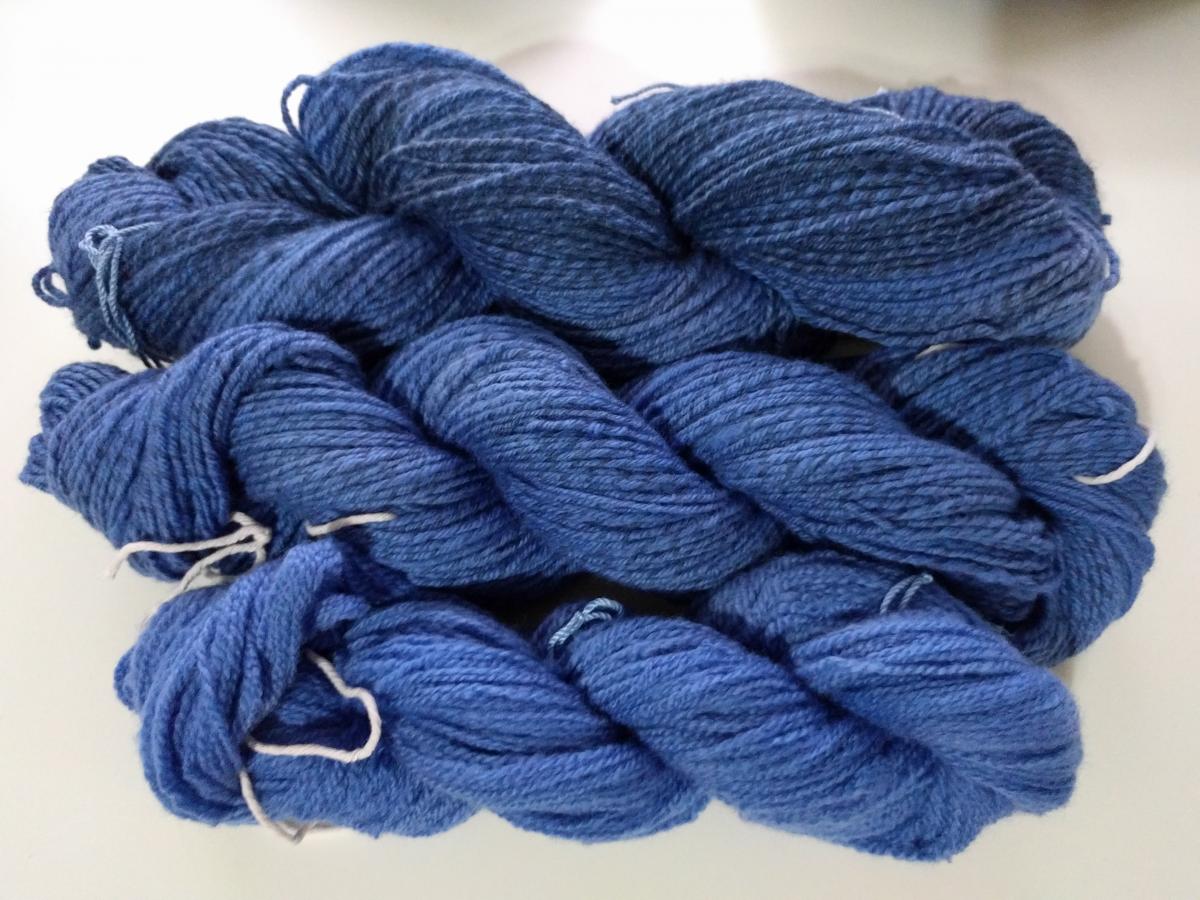 My latest sock yarn overdyes have dried, and I’m pretty darn happy with them.

I started out with a couple of Knit Picks shades I had around but didn’t care much for in socks, as well as one skein of W2D4’s That Yak Sock, which comes as grey due to the yak content.

This is That Yak Sock, overdyed with 1.5% Lanaset Violet. This particular dye shade is a favorite of a lot of people, including me.

Formerly Knit Picks Stroll in Tranquil, I hit it with greens, blues, and that same violet.

Knit Picks Stroll in Cork. If that looks like yarn barf, uh… I seem to have forgotten the ties after skeining. :eek: At least I’m happy with the colors! I added yellow, orange, one of the reds, and Bordeaux B.

That’s a total of about 350 grams of sock yarn, which should keep me busy for a while since I use 50-60 grams for a pair of socks. I think that’s all the dyeing I’m going to do for a little while. Between that, my sweater lot from the other thread, and other projects I have going on, I’ve got plenty of projects on my plate. 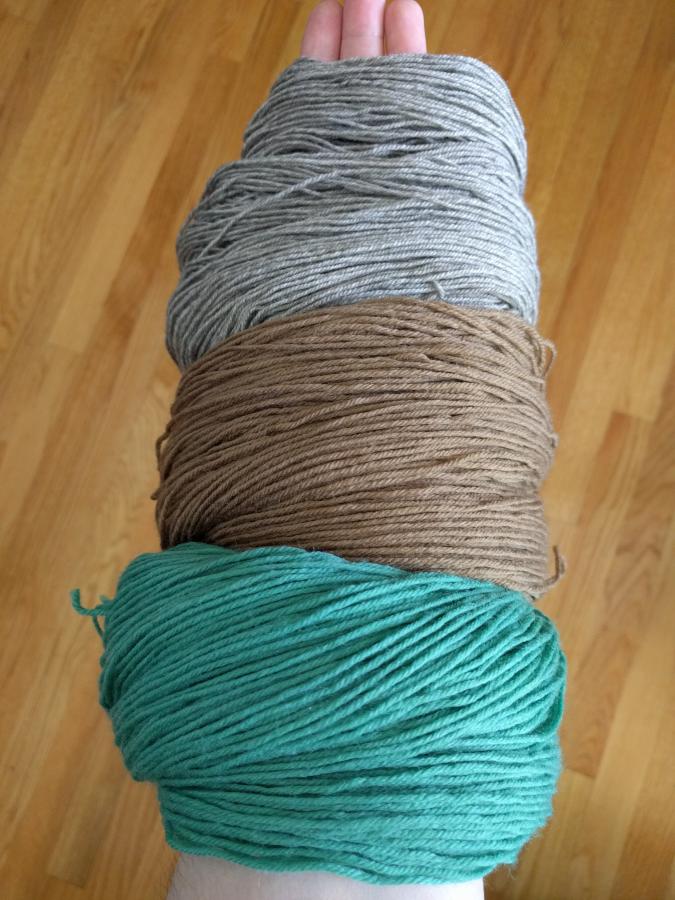 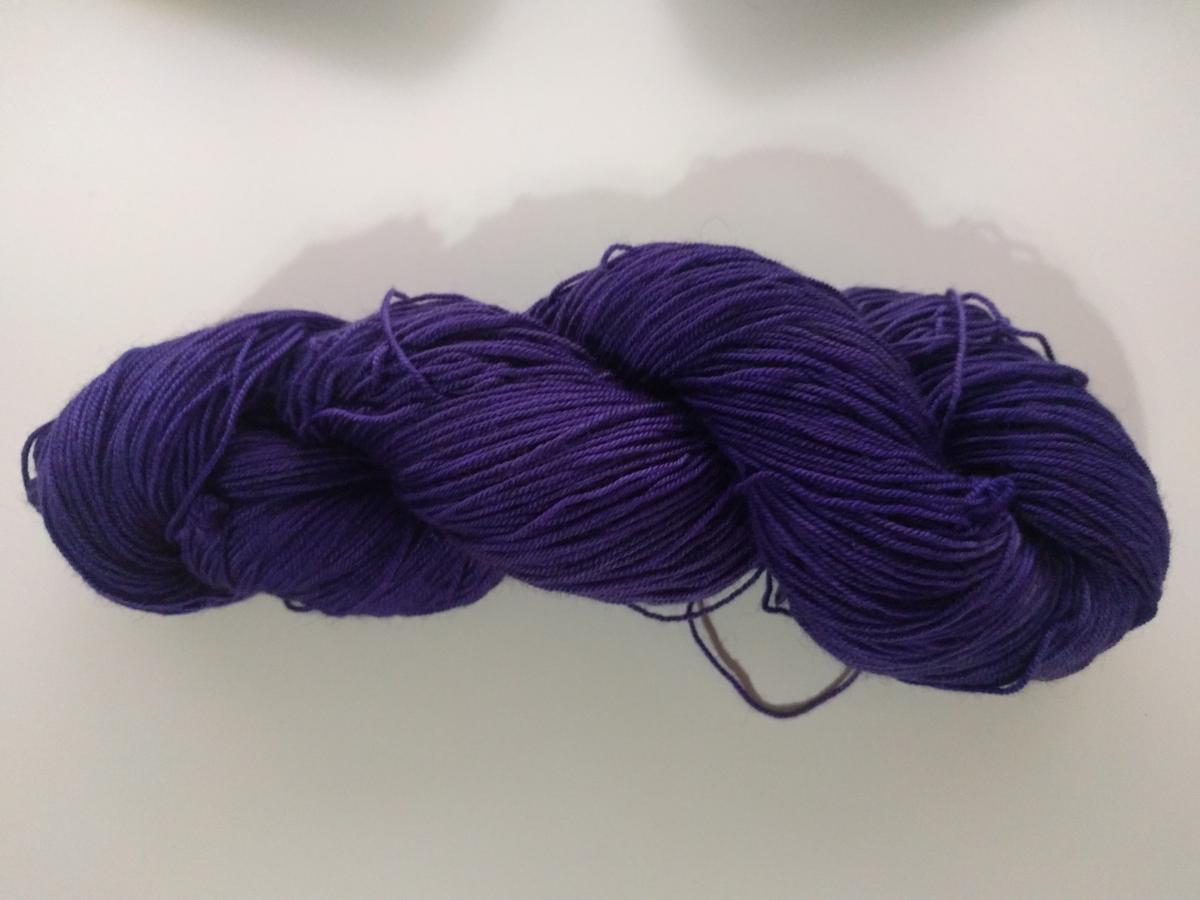 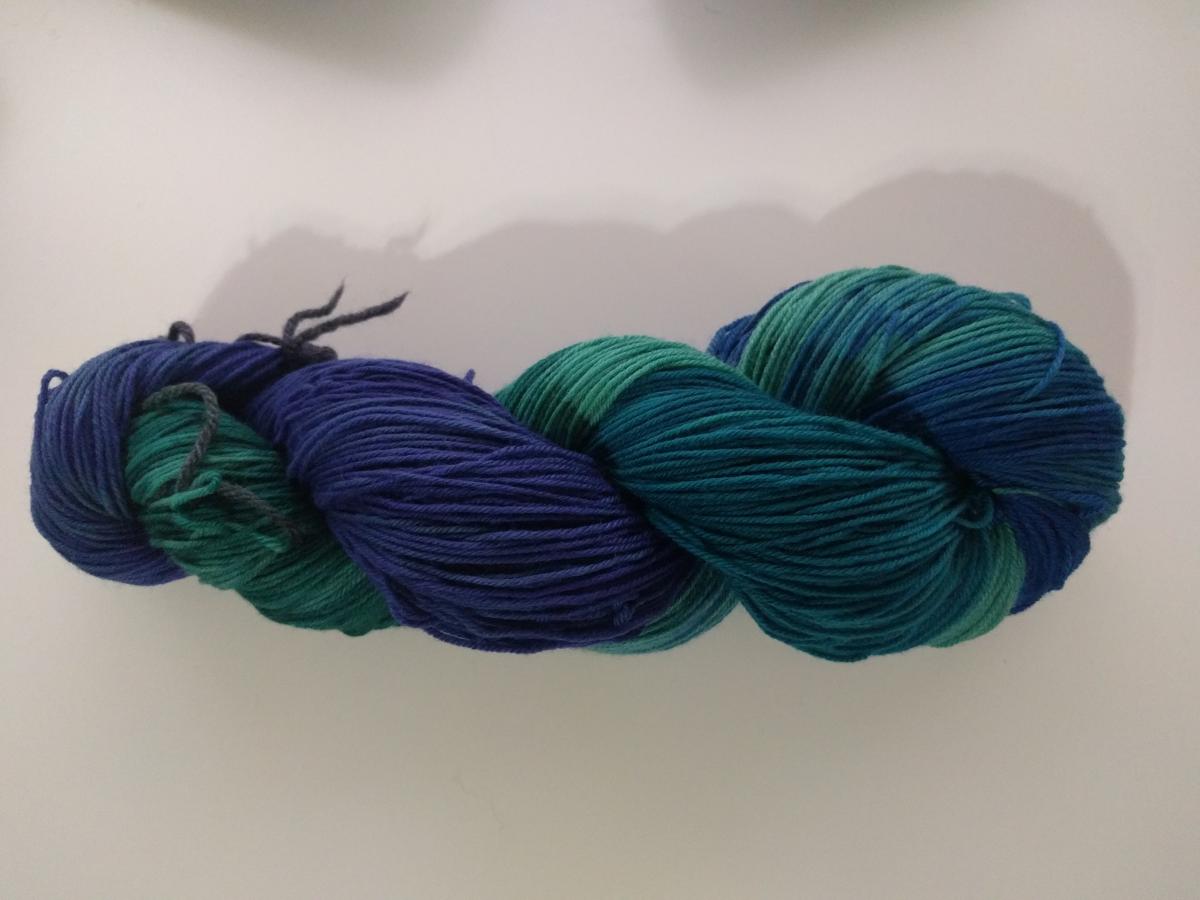 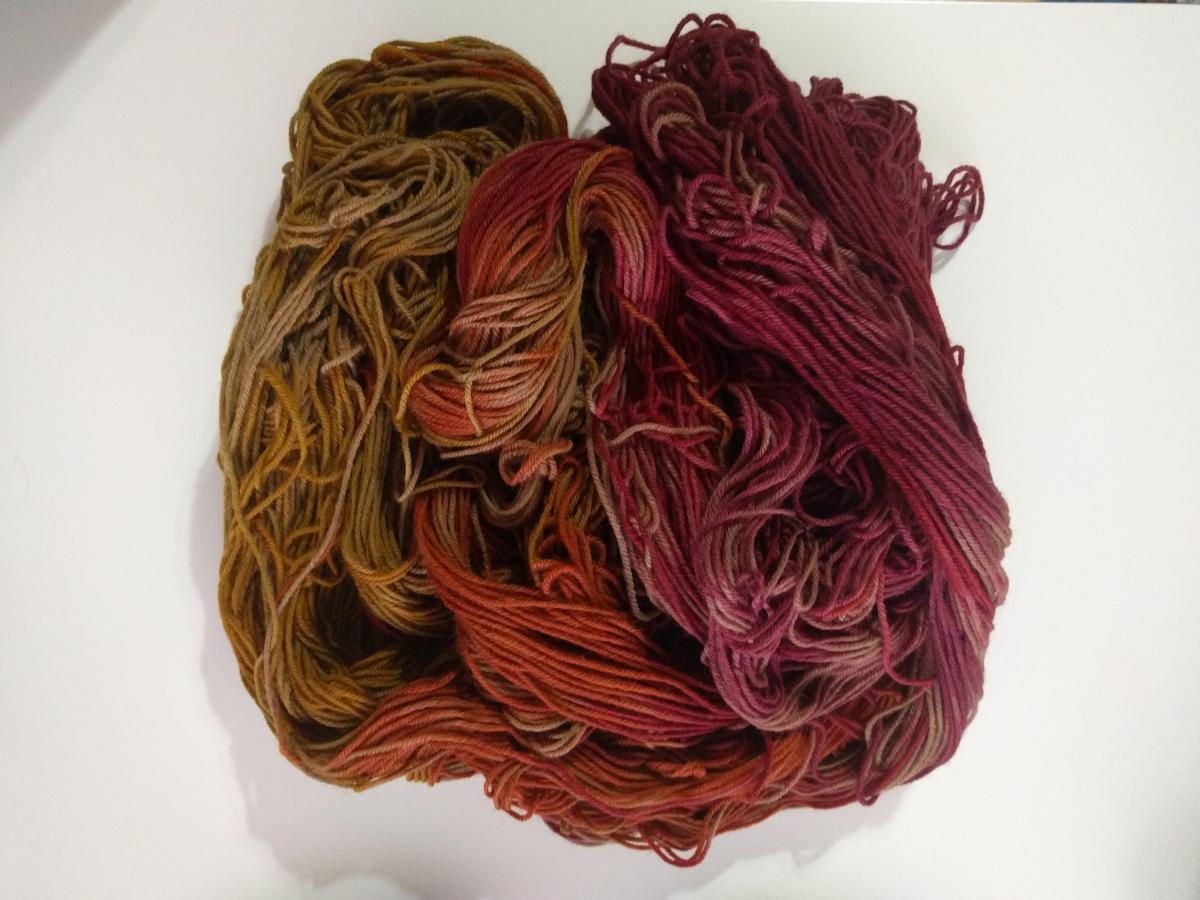 @HeatherAthebyne These yarns look great well done. I have overdyed a couple of yarns myself and very happy with the results. thanks for the thread this is so interesting.

This is a DK Merino Silk I purchased and the color was not what I expected. It was very khaki rather than olive so I have over-dyed with browns and turquoise and I think this will look great knit up as a cowl. I should have taken of the before over dyed but you get the idea.