Finally I was able to locate a Louet David 8 shaft 36" weaving width loom!! It is a long story how I came to own it. There is two parts missing which I have on order from Louet!! 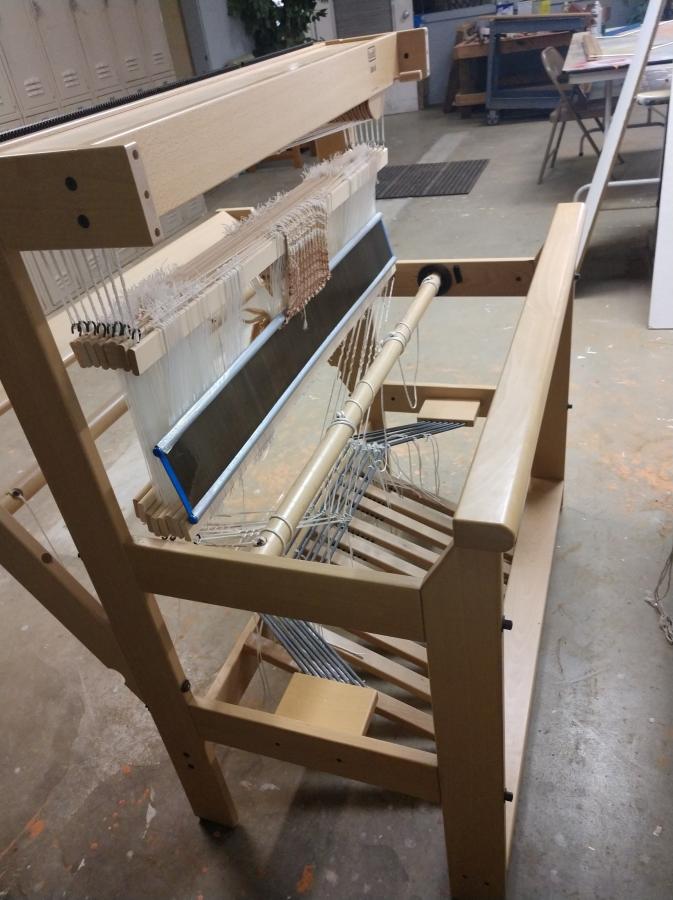 I love my David, although I do have to admit to almost selling him for a Spring. But it’s just so easy to warp and weave on that I can’t imagine ever letting it go.

I may be in the market for a new loom later this year. What makes that David special? Why do you like him and what are his flaws? I currently own a handmade counterbalance and have come to like it a great deal but want another type of loom like a jack loom as the cb has patterns it is not so good at.

Here are my pros and cons on the David loom. I’ll qualify this by saying that I also have an Oxaback Ulla Cyrus countermarche loom, and have owned a Tools of the Trade, Macomber Baby Mac, and Schacht Baby Wolf jack looms. Keep in mind that these are my personal preferences. YMMV I always recommend that you at least sit at a loom before you buy. I’m 5’7" and the Baby Mac and Baby Wolf were very uncomfortable for me to weave on, but one was a steal and the other a gift. Got rid of both when I got the Oxaback. If I only had room for one loom, I’d buy a Louet Spring.

Pros:
Built in raddle
Sliding beater bar (although I also like overhead swinging beaters too)
Sturdy without being overly heavy
Springs pull shafts back into place when treadles are released so no sticky shafts
Texsolv heddles which can be added on the fly! No worry about running out when your threading.
Easy to see tieup
Front hinged treadles with easy action (I was able to start weaving on this loom when I still had spinal and rib fractures)

Cons:
Shafts can float a bit on very lacy patterns with very unbalanced tieups. But I was able to overcome this by adding spring tension to the offending shaft while working on the project. I changed it back when I finished to keep from overstretching the spring.
Can’t beat hard with the sliding beater. I wouldn’t make rugs on this loom.
Treadle cords can come loose but this happens so rarely that it’s hardly worth mentioning
It’s a jack loom so linen can be fiddley. It’s the reason why I almost sold it. I’d much rather weave linen on a countermarche loom which keeps even tension on top and bottom when you open the shed. But the Oxaback fell into my life at that time and it does all the things that the David struggles with.

WOW! A lot to think about indeed. Thank you ever so much for the answer! I hope this will help others choose the loom they are really looking for based on what it can do. Not so much on looks…which is what I tend to do:o

Squee!!! I finally came up with a way to justify buying an Ashford Katie table loom so it’s on order. I’m not a huge fan of table looms, but how nice to have a small 8-shaft loom that can go traveling with me. My justification was that I need it (need, got that?) for some upcoming workshops I’ll be teaching. See? It’s a very logical business decision.

That’s my story and I’m sticking to it.

Haha! That’s how I ended up with my Jane. I sold three looms when I bought my Ulla Cyrus, but then didn’t have anything for workshops. I have to admit that really don’t like weaving on table looms, but it’s probably because I have floor looms available. But neither of them are portable, so it had to be done!

Exactly! I knew you’d all understand. I wove on a Kaite years ago at one of Joanne Hall’s workshops. I was surprised by how easy it was, but that price. Yikes! And I’m not a table loom fan. But Katie can go places the others can’t, so there we are. (I laugh when I remember how we got the Glimakra Standard home. in short, in 2 trips, one of which involved the side pieces perched precariously on the top of the X-Terra as we drove about 10 mph all the way home. Portable it is not!

@DebbiRYarn I am looking at buying another spinning wheel for demonstrations because I don’t want “newbies” spinning on my baby (a Tradional). I keep telling my husband I neeeed one. He is not convinced. Yet lol

I"m not going to say anything about that’s how the Kromski Polonaise came to live with us. I wanted a traditional-looking wheel that could take a certain amount of the elements for demonstrations. A LYS was going out of business and this was the floor model. The line was long for it, but I got it and I love it! So yes, you do need that wheel. Really!

I can’t believe it, but Katie had just arrived at the shop when I got there to teach this morning. I had to look at her waiting for me all day! Then I had to wait while George smoothed and waxed her plywood beater support and the end grain on her cloth and warp beams. Yes, it’s 2am and yes, I’ve spent hours warping her and weaving. She weaves good!! This isn’t the best photo, but I’m kind of wiped out and heading for bed.

Congratulations! She looks so pretty! You are fast, up and weaving already! Lovely weaving too!

@DebbiRYarn I lucked into finding a used Jane with the stand so I jumped on it. Had to drive to Lake Charles, but it was worth it.
I can’t believe you got the Glimakra home in an X-Terra! I used my husband’s F-350 pickup for the Ulla Cyrus and it was packed.

Arrrggghh! OLAD got me again! We had been having a big sale on spinning and weaving at the LYS where I teach. I had put this project on one of the little Erica looms before my wreck last year and it’s just been sitting and gathering dust since no one else there weaves. It was our shop loom and the only one left so I bought it for me to use for sampling. (We’ll be restocking everything after our new building is done.) 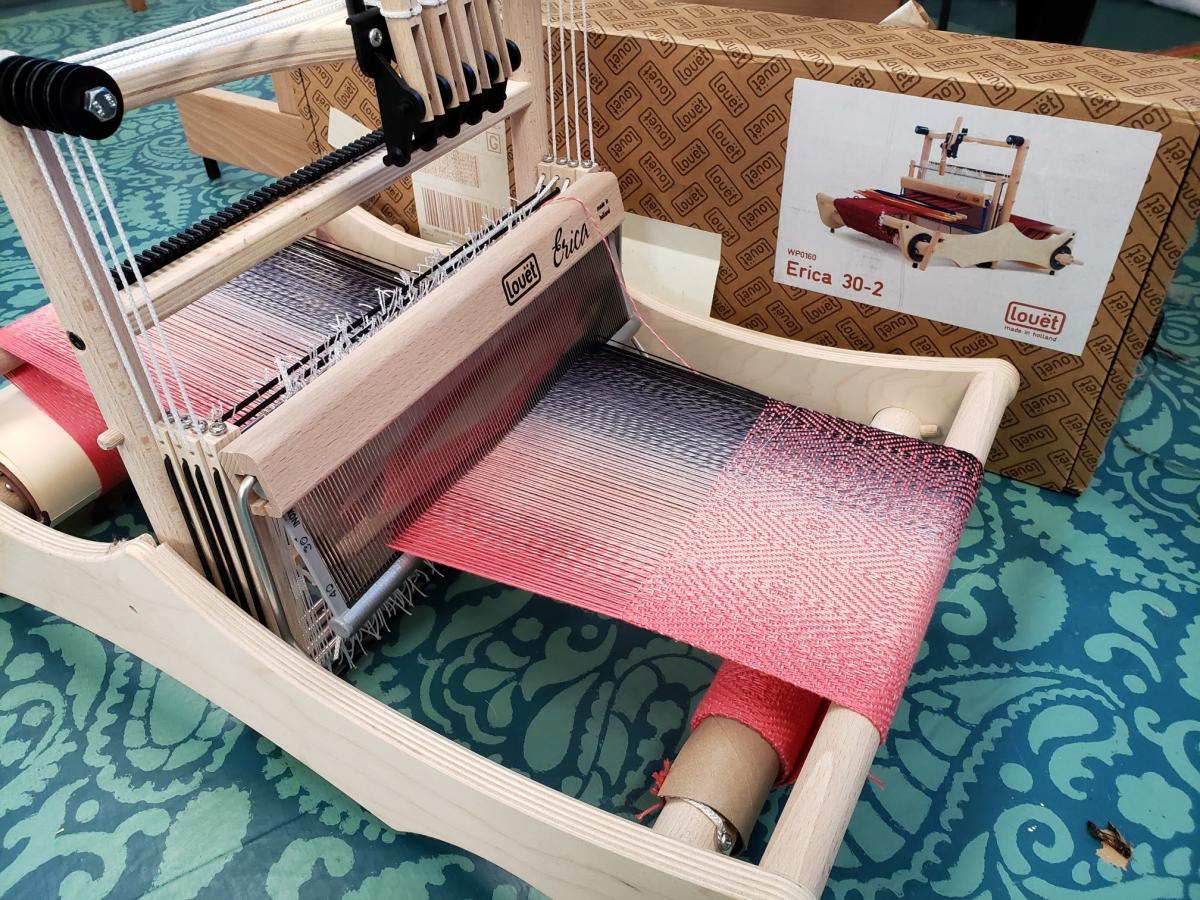 Yay!! What do you think of it? I’ve never woven on one and we’re thinking of stocking them as teaching looms.

I think it would be a good teaching loom, but I wouldn’t want it as my only loom. I’m not a fan of the bottom hung beater. Much prefer overhead! Also, replace the metal bars that come with it for lease sticks with actual wooden sticks. The metal bars are way too heavy and unwieldy. But other than that, I like it a lot for the portability factor.

I’m afraid I am about to come down with OLAD. I normally go to SAFF every year but won’t make it this year. Instead, I have my eye on an inkle loom. Right now, I am struggling between 2 that I have seen that are incredibly beautiful. Stay tuned for updates…

They’re calling! The Siren Song of the Loom. No weaver can resist.

So exciting! Can’t wait for your update!