I had my first ever warp string breakage today; I’ve been weaving on a RH loom for about 10 months and now on a floor loom for about a week and I have seen videos explaining what to do if a warp string breaks. Of course, they all say not to panic, that it’s very fixable, but I guess I’ve had this secret hope it would never happen to me, even though I know it surely would have to. If it happens to the professional weavers with tons of experience, it’s going to happen to me, a newbie, for sure. So sure enough, this morning, right after posting to someone that so far my handspun yarn hasn’t had any breakage in this project, I went back to my weaving and … a breakage occurred. I guess I needed a bit of humble pie–although I wasn’t really bragging when I said I hadn’t had a breakage yet–it was more that I was hoping it wouldn’t happen!

In a way, I’m rather glad it did–it took away the fear of it. It really was not hard at all to repair it! I added a new yarn from the back of the loom, threaded it through the empty heddle and reed slot and on through to the woven fabric, where I took a tapestry needle and wove it alongside the broken warp thread for about 2 inches. So easy! I know most of you experienced weavers are probably rolling your eyes or laughing since you already know all this, but in case it helps a newbie, I wanted to share this. It’s all part of the learning experience and now I can check that off my “list” of things to learn by doing.

I do have a question for those who have had this happen before–the 2nd picture shows my new string on a weighted hook, but the broken string is also hanging there. I’m guessing when I get to the end, will the ones beside it need to be weighted? I’m not sure if it is a continuous thread or one that was knotted at the end, but since it was on the warping board, there’s a good chance it was just a continuous warp thread and I have no idea whether the threads beside it will come loose once I get to the end of the warp. 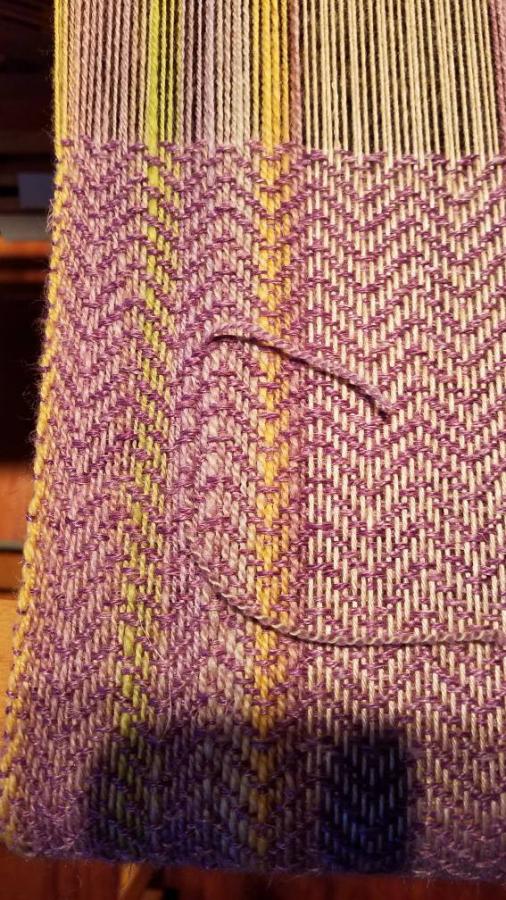 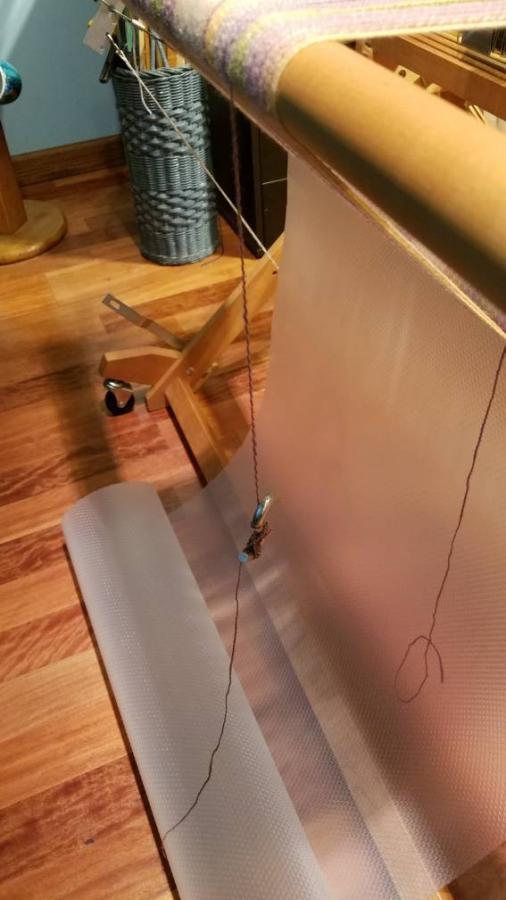 I haven’t done that many repairs yet, other than floats, and I’ve been lucky enough to undo the nearest warp thread and re-weave with a needle. I’m not sure what happens with the warp threads that are neighbors with your broken one - that’s a good question. I think you will feel it if they come loose, and they might not until the warp beam unwraps pretty far, towards the end. I think if you had them come loose you could probably tie little extensions onto them and knot them to the warp rod since they would be part of loom waste anyway. It seems like I repaired a warp thread on my first scarf. When you think about it, by nature, weaving is nearly always a series of joins, because of the limited size of shuttles and sheds. So if we can live with weft-wise joins, I guess warp-wise joins/overlaps/repairs are no biggie. It is good that you have gotten over the fear of them.

I remember some of my first spindle spinning joins and how terrorizing they were. One day, I faced a dreaded join - set the work aside to get a snack (procrastinating). When I returned to the work, the fresh fiber supply had spontaneously joined itself to the tail of what I had last spun, and it was a perfect join that I could not even see. I was shocked. It made me bolder in taking charge of my joins.

I think once your piece is finished, the threads will mesh and become one.

Thanks for the encouragement. Sometimes we fear things that are just nothing to be afraid of!

I’ve had situations where the neighboring warp threads start loosening up. At first, I couldn’t figure out what was going on until I went to the back of the loom and saw it was a neighbor(s) to the broken warp thread still hanging out for the ride (you described the continuous warp situation well). I used the broken warp to tie-down and tension the neighbors…voila! I first notice the looser warp threads depending on how much tension I am using on my warp and how close I am to the end. It seems to happen mostly when the end of the warp comes around off the warp beam and is ready to head up the back. Have fun!

Thanks for that input–I’ll keep that hanging broken thread handy to tighten the others. That’s a good suggestion! So far there’s still enough of it rolled around the warp beam so it’s staying tight, but I think it will definitely change when it’s unrolled.

Thanks for this discussion - I will keep in mind for when it happens.

I just unrolled it enough to see the back warping beam, so I weighted that particular broken thread down, in hopes that it will keep any loose neighboring threads tensioned.

@Carlota, that’s why I posted it in this thread–I figured sooner or later someone else might encounter this and be glad for it.

Yes. I think I did the same thing. I do remember wondering what was going on when I got towards the end and had loose threads it has been a while. I usually have my floating selvedges break so it’s hard to remember what I did when warp thread broke.