I don’t know if it’s just me or something has changed, but again I was denied access to the above new topic. I wanted to make a comment and it said I couldn’t. What am I doing wrong?

It looks like that topic is inside of a group, are you a member of that group?

I didn’t know that I had to become a member of each group! I guess I thought if I was drilling down on it I was automatically a part of the group. Okay. I know that now. Thanks and sorry I bothered you.

No worries, it’s just the way the software works, if you’re a member of the forum and the group is “open” you can view as a guest. But you can’t post unless you join the group.

Are all groups “closed”?

I’d like to see all groups ‘open’ unless they request to be closed, maybe due to sensitive discussions such as our political thread. I’ve written up comments many times, only to be told I can’t post them once I try. It’s annoying to have to “join” every thread I want to post in. And if I do, I get notices every time someone else posts in that thread or group. Can’t we make this simpler?

@sewbizgirl Agree. The other thing I’d like to see is a change to make moderated groups still open to join. I started a destash group (I ran one on R for several years) and I have to accept each new member. I feel like I’m leaving people hanging if I can’t be on OU for a few hours. I could just make the group open to join, but then it’s not moderated at all. I found on R that the group I took over there did much better with a set of guidelines and moderators to reach out to with questions or concerns, so I really would like the group to still have mods.

I’m not sure I understand the workflow, are you on mobile or desktop? Where do you navigate that you’re seeing a bunch of threads that don’t indicate they are in groups?

I haven’t run into this issue so I think I’m navigating differently.

Oooh, I think I get it now, if you go in recent activity or the highlights tabs on the side it shows group stuff mixed with the regular forums. I’ll see if there is something I can adjust to make this better.

@Admin Not the OP, but I think it’s easy to miss that posts are coming from a group rather than a forum. Most of us who came from R are used to a forum set up in a grid format where instead of viewing all recent posts in that order (or, as labeled here, “new topics”) from wherever they came from, we’ve had a page where each group or forum has its own grid. So, let’s say one is interested in talking about yarn. One simply scrolls down to the grid labeled “yarn” (or whatever) and can then see the most recent threads for that category or group. Here we can see where the post originated, but it’s not immediately obvious that the post is in a group rather than a forum. It’s a bit of a guessing game and one has to pay attention not only to the thread title, but to the link that shows where the original thread resides. I hope I’m making some sense. I think a lot of the difference has to do with a custom site rather than an already available interface. As much as I dislike how the ownership has presented themselves over the last few years, I’ve always thought that that website is extremely well done. I used several of the ideas from R a couple of years ago when I worked with my website designer to design a new website for my own business (not fiber related).

I closed my R account that had all of my groups and other info, but here’s a shot of my secondary account that is still active (though unused). All of one’s groups and also the main forums show up on a single page called “your boards”, but then one has the ability to create new tabs with a personalized label and arrange their groups and forums however they want on those tabs. I went ahead and joined a couple of groups and set up another tab just for a better sample screen grab:

ETA: Please note that I am not asking that this site be the same as R, but they do offer some really good examples of organization that leads to good functionality. 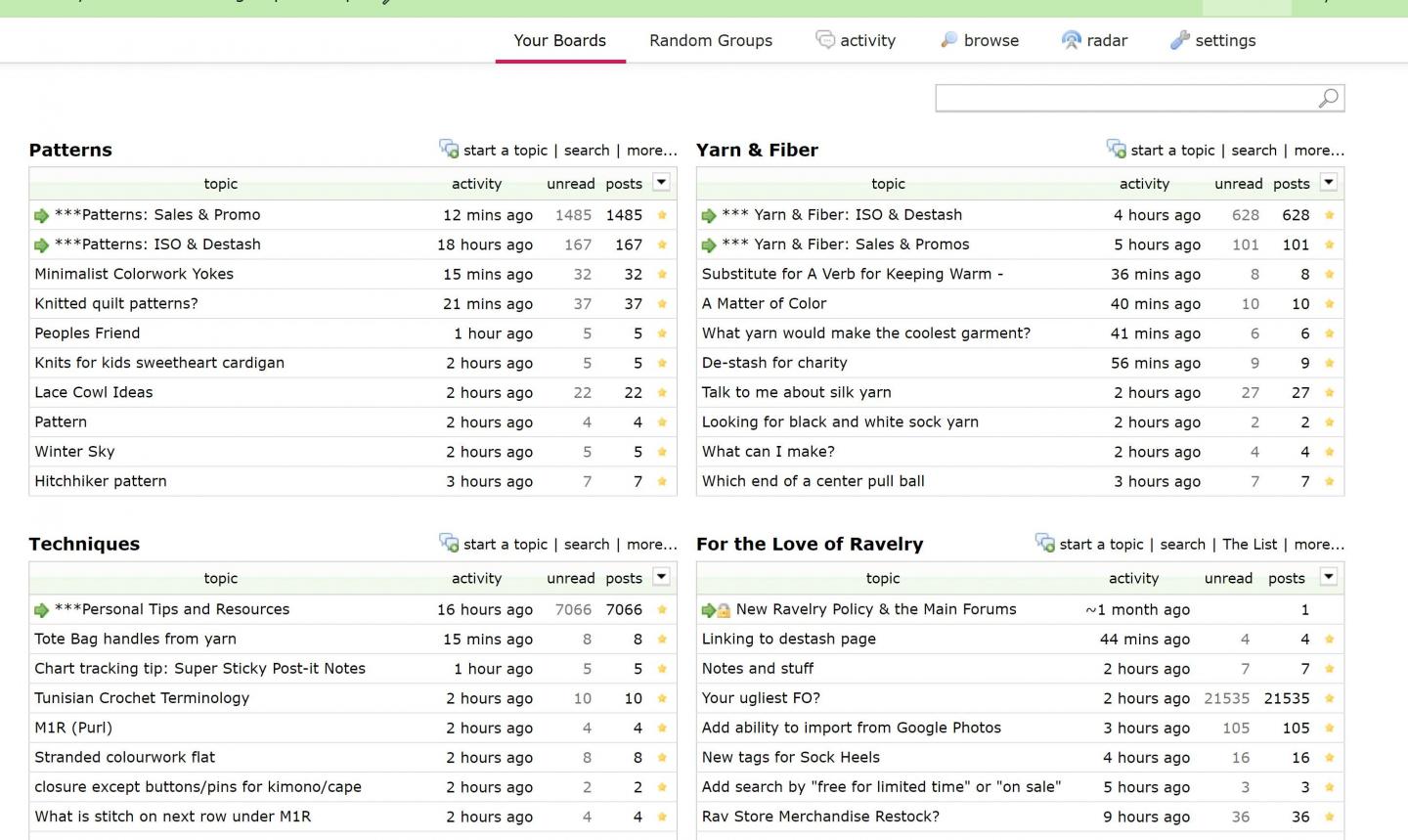 Gotcha, I updated the main forum page to where the “trending” and “new” topics on the side should be only forum posts now. I haven’t figured out how to make the “recent activity” page just forum posts I’m going to do some searching and see if I can figure out how to update that too. That way to see group posts you’d need to be in the group area, or to see forum posts you’d be in the forum area to hopefully make it clearer.

@Admin JMHO, but I think I’d leave that new topics page alone. It makes sense to have the forums page only show forum activity. However, if you click that “New topics” link and it’s only forum topics I think you’re going to lose a lot of group activity. Lots of people don’t know the difference or don’t differentiate between the terms “forums” and “groups” and will be expecting to to see those topics in a combined location. Obviously I’m not programming the site so I don’t know what can be done or even what you want to do…just trying to analyze how people are finding information. IME from R, lots of people there also didn’t (or don’t) differentiate between forums and groups probably because we could see all of those groups and forums on the same page(s). I think what is causing confusion is that all of the information from every post on the site is coming at us instead of only information from the forums and from groups that we’ve joined. It’s not so cumbersome now, but if the site gets big then there’s going to be a sea of threads to try to sort through, all jumbled up from different forum areas and groups. So when someone clicks a thread from a group, they’re expecting to be able to post whether they have joined the group or not (because this is what most of us are used to doing). Perhaps if there isn’t currently a way to display group and forums in in some sort of table format, maybe there is a way to make it so the threads that show up on an individual’s “New Topics” link are only from the forums and groups that they’ve joined. IDK if that’s at all possible/customizable, but it’s an idea that might eliminate some confusion and make it easier for people to join in conversations that interest them. An alternate idea is to give people the ability to hide threads from groups that don’t interest them or even hide individual threads. I’ll note that the ability to hide individual threads may cut down on arguments among posters. Even in fiber arts people have strong opinions and sometimes the easiest thing to do is walk away from the discussion which is easier to do if you can’t see it.

Anyway…just thinking out loud. I’m sure there is a lot more to worry about than forums and groups. I’d personally rather see other features come about than worry about how the forums are set up at this point, particularly if OU will eventually move again to a different platform. (LOL! That’s funny for me to abbreviate living in Oklahoma.)

@knitterlady13. I abbreviate this website as OUR. The main reason is my fingers would bleed burnt orange should I leave that R off the end!!!

@plainjaneknitter ROFLOL! I have no horse in that race. I’m from Illinois and I went to KU (that’s Kansas…not Kentucky).