Can this be fixed without frogging 1/4 of the blanket?

I am knitting a circular baby blanket that is super easy; too easy, in fact, and apparently at some point I was totally checked out while knitting! Actually, I think it was when I was at the end of one skein and started another, but forgot what row I was on. To top it off, I didn’t notice it until I was probably 1/4 of the blanket past it already! But I’m wondering if there is a way to unravel that part since the end of the yarn is there, re-knit the row properly (garter stitch instead of stockinette) and then rejoin it to the row above it without frogging the remainder of the blanket back to that point? (I can upload a bigger photo if that helps) 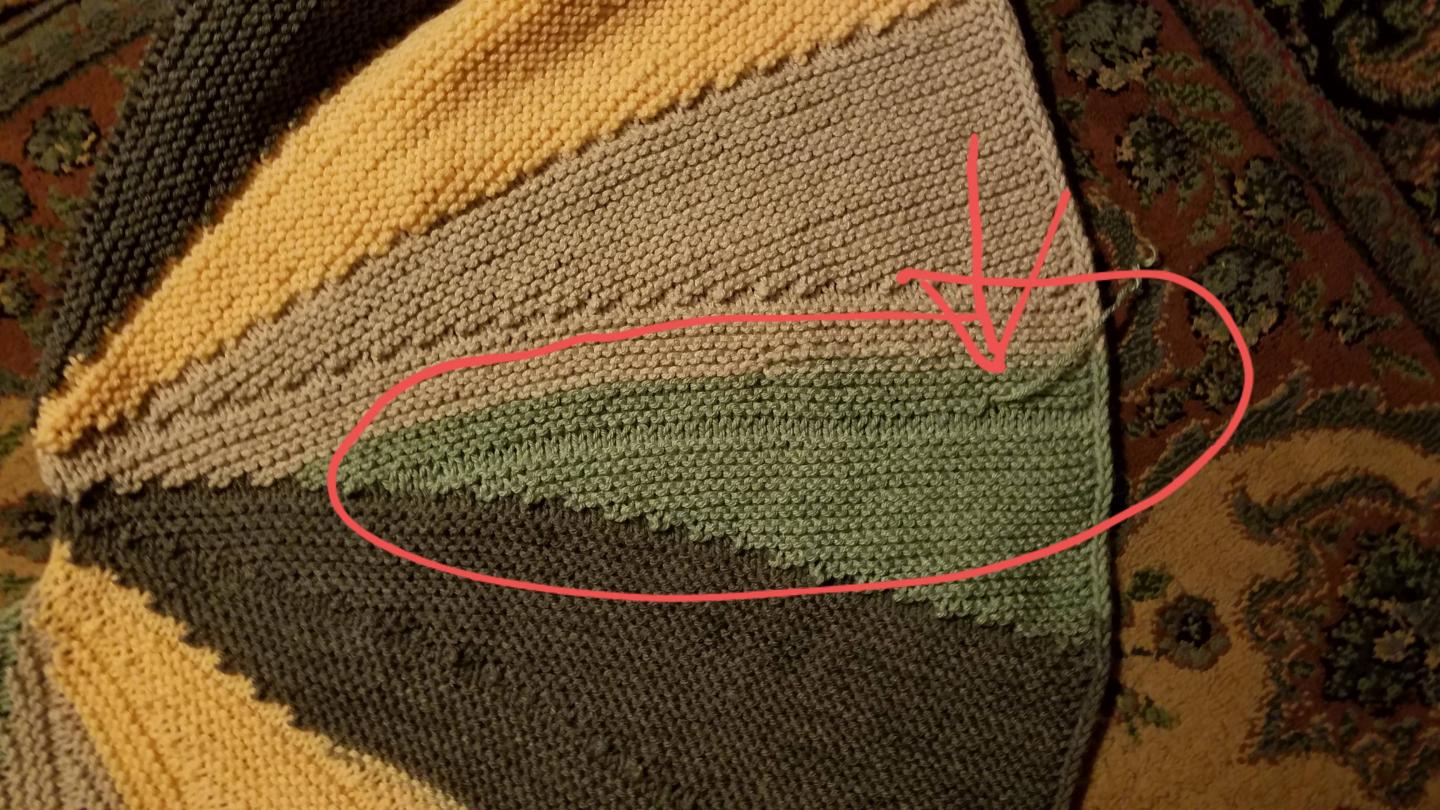 Honestly in this case I think the easiest fix is to rip back or leave it as a design feature. Since its the entire row and you have short rows, dropping down would be a real pain. You could try duplicate stitching over the area. If you don’t like it you can take the duplicate stitch out.

I think to the “untrained eye” it will look just fine. The other colors have a little stockinette instead of garter in the middle, and I am guessing folks will assume it was meant to be that way. If you are like me you find it hard to get over things like this - but I’ve learned… and I’ve learned usually the recipient has no idea. :rolleyes:

Never thought about a duplicate stitch! Hmm…might give it a try and see once! Yes, dropping down would be a pain, and it would a major process.I was wondering if I could pull it out and reconnect, but maybe the “design feature” would be the way to go.

Yes, it’s amazing how OCD I can be about something like this; maybe it’s pride?!? Because I am NOT a detail-oriented person when it comes to so many things, but with my knitting, I want it to look perfect. I’m in a bit of a time crunch, since I’m making it for an expectant mom of twins and I still have one more to go; otherwise, I’d probably frog it back and fix it. But she’s due in December and I totally expect her to go early with twins, so I need to get moving and get the 2nd one started soon!

@rkennell - I read somewhere that the Native Americans actually purposefully make a mistake in their stitchings as it is their belief only God is perfect and they shouldn’t strive to be. <3

Are you going to use that green again? You could always repeat the same “mistake” in just the green sections. That would make it look like it was done on purpose.

I agree, repeat the “design feature” on the other side of the blanket.

@rkennell - I think that if you are very comfortable with kitchner stitch, you could: [INDENT]1) tink (knit backwards, or un-knit, stitch by stitch) from the end of the green yarn
2) correct the garter stitch rows
3) use kitchener to reconnect the repaired rows to the stitches from the tink (step 1, above)[/INDENT]
That said, it may be time consuming.

I may be alone in this view, but I believe it is worth taking the time to fix the row, whether you frog or tink!
It is a really neat blanket, and it will last for decades.

I agree with @knitterlady13 and @FreedomLover - make the same error elsewhere and it becomes a design feature.

Otherwise, I would rip it back. It would take more time to fix it and, honestly, I like to knit. Ripping and reknitting is no big deal, dropping down or Kitchener-ing would be a frustrating and joy-sucking mess for me.

I agree with@knitterlady13 and @FreedomLover - make the same error elsewhere and it becomes a design feature.

Otherwise, I would rip it back. It would take more time to fix it and, honestly, I like to knit. Ripping and reknitting is no big deal, dropping down or Kitchener-ing would be a frustrating and joy-sucking mess for me.

I would rip back. I know it is time-consuming, but so would a repair be in this situation and personally, I would rather knit than fix. Also, if you want the two blankets to be the same, you will have to repeat the mistake so they match. Take a deep breath and go!

If you’re willing, you can always try to repair it by removing the screwed-up row(s) and grafting it back together. But if you run into trouble, THEN you can frog back. You will at least have gained some experience in making a repair but without ruining the project beyond ultimate fixing.

Otherwise, repeating the “alternative pattern” in at least one more spot does indeed turn it into a design feature!

So, this blanket is nearly done–no option for repeating the “design”, really. @ilexedits, by grafting them together, are you suggesting the kitchner stitch that @qfknit is recommending? I have done the kitchner stitch with socks, so it wouldn’t be totally foreign. I am doing a 2nd blanket that is the same design, different colors, but same pattern, so it would be quite obvious if it wasn’t in both and I think it would look quite funny to have just one row like this, even in both blankets. Seriously considering it…

@ilexedits Wouldn’t this be an easy way to rejoin it?https://www.youtube.com/watch?v=vWJzErobQmc

I’d just leave it as an intended imperfection. Deliberately make the same mistake on the other blanket.

As a mother of twins myself I am certain she won’t notice it until she’s a grandmother.

@rkennell , yes, weaving, grafting, and Kitchener are all names for the same thing. If you do it on a knitted fabric rather than along two edges of live stitches, it’s called duplicate stitch or Swiss darning (among other names).

I gave up long ago on the “standard” Kitchener “song,” because there’s a different song for garter and stockinette, and if you’re doing any kind of texture pattern, you simply have to know whether you need to make a purl bump or not. If you do, then the “mini-song” is “up and down” through the two loops, and if you don’t need a purl bump, you do “down and up” through the two loops.

If you’re going to try to emulate the layout of the tan wedge immediately above the circled green area, well, take the phone off the hook, kick the kids out of the house, and lock the pets out of the room you’re working in! If you just want to make a plain garter ridge like in the yellow wedge that’s above the tan wedge, that would be much easier!

Oh! Why don’t you just do a line of purl bumps in duplicate stitch down the central row of stockinette? You wouldn’t have to take out any of the existing yarn, and you’d have no live loops trying to slither away.

Keep us posted on what you decide!!!

@ilexedits, I FINALLY am posting a picture. I ended up going back and frogging to the goof up because I decided it needed a bit more of that color to make it come out even at the end. Which means I didn’t finish it until this weekend, but at least it’s done! I seriously considered trying to open it up there at the messup, restitch it properly and then try to graft it back, but when I realized my color striping wasn’t going to come out right, I figured I’d feel better if I just went back and did it over and then I could add in some more of the green and make the coloring work out. One down and one to go! (Cast it on this afternoon) Thank goodness it’s a different color–I’m ready for some variety. This is a large blanket! 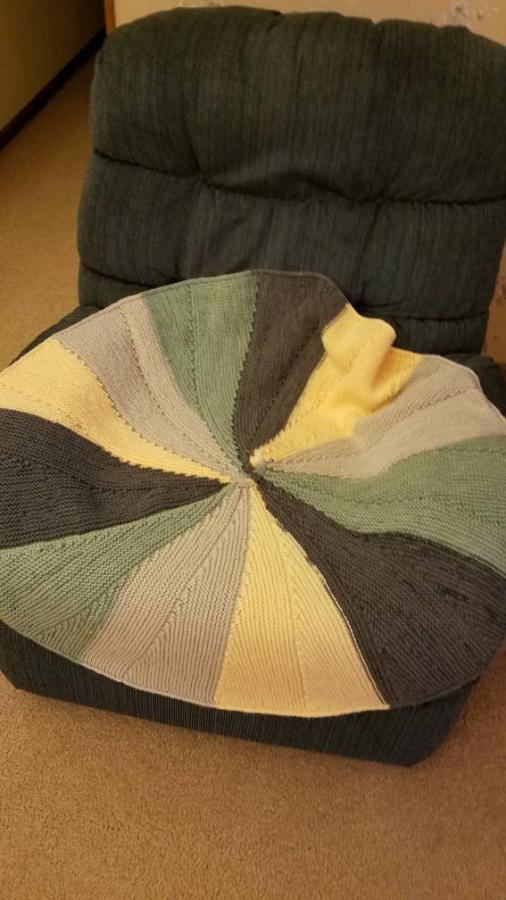 Beautiful! Clearly well worth the effort.